“The mob was so dense that the yard master had to call city police to help clear the tracks of an estimated crowd of 10,000 . . . and autos coming from as far as you could see."

The massive 200-inch Palomar telescope was begun in 1928. It had required the most creative engineering in the world to invent the technology many had said was impossible. The effort would consume its creator. The mirror alone took eleven years to polish. The telescope was so big it had to be fabricated at a shipyard. The entire process had initiated the era of big science. Twenty years after it had been conceived the new instrument was finally ready. A new generation of astronomers would now carry on the quest begun by Hale and once again revolutionize our understanding of the universe.

The Palomar 200-inch telescope, weighing over a million pounds, is so exquisitely balanced that it can be moved by the push of a hand. Its giant curved mirror was polished to near optical perfection--within two-millionths of an inch. In the 1920s many had thought that to be impossible. 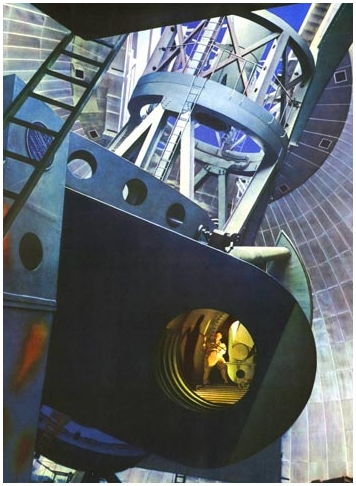 The highly reflective coating of aluminum on the Palomar 200-inch mirror is only a few molecules thick and it slowly degrades and collects dust. It must be cleaned about once a year so the astronomers can see the faintest objects in space.  The complex process takes several days.

The 200-inch mirror, which had proved nearly impossible to produce, was finally finished at the Corning Glass Works in New York in 1936. A special train was prepared and all rail traffic on the route was stopped. Crowds of as many as ten thousand watch the Glass Train go by. It took three days to cross the country at 25 MPH.

Photo of the Hale Telescope